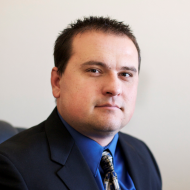 Grocery Clerk to deca-millionaire in my 30's. A normal guy who doesn't complicate money or wealth building. How I did it www.futuremoneytrends.com

United States
Texas
Male
Remote Interviews
About Me
EntrepreneurshipReal Estate
Daniel Ameduri is Co-Founder of the Future Money Trends Letter. He is a self-made multi-millionaire, full time fact finder, and a proud father of 3.
After warning family and friends in 2007 about the coming market and mortgage collapse, he started his own YouTube channel, VisionVictory, which has received 10 million video views. On March 18, 2008, Daniel called for Dow 8,000, the collapse of Lehman Brothers, AIG, and Washington Mutual. During the mortgage crisis, he helped people buy Put Options on Countrywide Mortgage (these Puts saw a gain of 1,400%).
Not listening to his own advice, Daniel made a bad bet with Southern California's real estate market which wiped out his entire income and savings, leaving him broke. With a special focus and passion for personal finance, he re-built his wealth and declared financial independence in 2012. Having no mortgage and enough rental properties to pay for his life style, he was able to build his business larger than he could have ever imagined. By NOT focusing on money, but by focusing on over delivering value to his customers.
In 2010, when he launched FutureMoneyTrends.com it became the first personal finance letter for the new economy. Today, FutureMoneyTrends.com has been the most widely recognized authority for financial freedom and economic research in commodities, cryptocurrencies, personal finance, cash flow, and income ideas. Our main mission is to increase your financial options so you can become financially independent. We partner with key players in the micro cap space to build companies and profit from the development of these businesses.
Each week, we share wealth building interviews, a weekly wealth digest, and new investment ideas. When it comes to economics or macro-economic investing, he is a real trend forecaster. He has been featured in Wall Street Journal, ABCWorldNews, and RTTV. His platform is growing every day, reaching almost 150,000 subscribers.

1. What was the craziest thing you and your wife did to save money?

2. What is the biggest disaster you've faced as a real estate investor?

3. Profiling crypto at $13, how did you see the blockchain trend so early?

4. Why do you advocate some savings in gold and silver?

5. How do you become financially independent?

6. What are some key habits that help you in your daily life?

7. What are you teaching your kids about money?

8. You purposely chose not to go to college, will you recommend the same to your kids?

10. How have you purchased all of your real estate investments with only seller financing for the past decade?

11. Why do you believe retirement is a scam?

Along with over 50 others