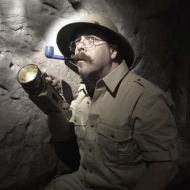 [Featured in Forbes Magazine - Also this May 2018 Modern Vintage Magazine]

Douglas Smythe was first introduced to traditional shaving as a child watching his dad shave on the weekends, fast forward to today and find him and his business, Phoenix Shaving, trailblazing on the forefront of the Traditional Wet Shaving revival we are currently seeing crop up around the world.

Having created his first perfume at age 8 with his chemistry set the die was cast. After college he moved to Central America where he lived in a hammock at the edge of the rain forest. While there he developed an after bite type solution that relieved the inflammation of bug bites. The product became popular with both locals and tourist alike, so much so, four years later he was back in the USA producing and shipping his wares to Costa Rica.

Eventually his passion for male grooming and traditional shaving became the focal point of his business and Phoenix Shaving was born. Almost immediately, folks began to take notice of Phoenix Shaving's daring scents and creative approach to all things shaving and within 2 years both him and his business partner were featured in Forbes Magazine.

Douglas is also co-host of the popular morning show I'd Lather Be Shaving and organizer of The Big Shave West, a yearly "Shave Festival" held each year outside of Los Angeles in sunny Pasadena, California. He is a lively online personality and a dynamic public speaker on all things male grooming with a concentration in the art and technique of traditional shaving.

Douglas also runs the YouTube show I'd Lather Be Shaving.

1) How to get the best shave of your life.
2) Why most men think they have sensitive skin but do not.
3) Shaving History
4) Traditional Shaving
5) The Traditional Wet Shaving Revival
6) Facial Hair and Male Grooming
7) Perfuming, Colognes & Aftershaves

1) What is wet shaving?
2) How did you get started?
3) What are some of your products and what sets them apart.
4) Do you see Traditional Shaving returning in a big way?
5) How do you feel about the Dollar Shave Club or Harry's?
6) What are some must have classic aftershaves?
7) How does one begin to Traditional Shave?

No sitting on the sideline dad podcast